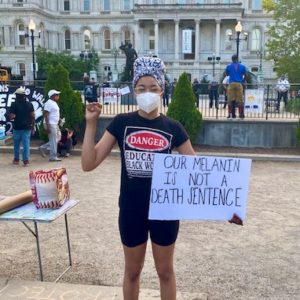 The State of Diversity & Inclusion in 2020 and Beyond

Given the recent challenges our country is facing, my responsibility, as the head of our agency’s Diversity and Inclusion Committee, means more to me than I ever imagined. It is something I do with pride, not only as an African American woman who has been a part of the movement for as long as I can remember, but also as a member of the LGBTQ community.

As part of my responsibilities I recently had the pleasure of virtually attending Adweek’s first Diversity and Inclusion Summit. Leading up to the two-and-a-half hour event, the African American community continued to experience the wrath of a racially unjust police system resulting in the wrongful deaths of #GeorgeFloyd, #AhmaudArbery and #BreonnaTaylor broadcast all over the world.

Ad Color Founder and Chief Diversity Officer of Omnicon, Tiffany R. Warren, displayed these hashtags on her ZOOM background while discussing the importance of: supporting D&I industry programs, stepping up efforts to foster human connections during these chaotic times, and relying on diversity experts to understand what’s going on in our communities.

The summit was a clear reminder that, in Corporate America and even in everyday life, minorities are not properly respected and under-represented. Facebook CMO, Antiono Lucio, challenged the industry to make systematic change stating:

“Unless you’re ready to look at someone in the eye that feels fundamentally different than you do and accept the fact that his or her thinking is going to make you better, going to make the product better and going to accelerate our business forward, then talking about diversity is just nice talk.”

The summit also touched on issues that the Hispanic, Asian and LGBTQ communities face due to lack of diversity within brands and corporations. AdWeek started a difficult but necessary conversation regarding all POC and LGBTQ people within the advertising world by hosting this remarkable panel.

But what do we do about it? With all 50 States exercising their first amendment right to free speech in support of the #BlackLivesMatters movement, Curaleaf’s CMO, Jason White, highlighted the injustice the African American community faces with the expansion of the Cannabis Industry saying:

“If we’re going to be a part of change, we have to make it part of our business model. The sooner we stop with the stigma and let these marginalized communities feel that it’s a space they can step into, the faster we will advance this industry.”

Even in 2020, there are constant reminders of the uphill fight:

When will there be a turning point in diversity and inclusion, Corporate America and the culture of the land of the free and home of the brave?